Underneath The Madness of Cryptocurrency is Magic

Given the current madness of cryptocurrency – “returns” of >10,000% for some speculators everyone is talking about the “bubble”. Others are talking about Bitcoin hitting insanely high values ($1M and higher).

There are some semi-coherent economic arguments about the value and usefulness of these coins and tokens.

But they are missing the point.

The fundamental shift that is going to change things lies under these crytocurrencies – the blockchain, ledger and other decentralized data stores that are powering the cryptocurrencies.

But there is a problem here.

The blockchain isn’t sexy. Not by itself at least.

Add in cypherpunk and even some cryptoanarchy and I get why cryptocurrencies are getting all the buzz. The underlying tech is kind of attractive for geeks – but it doesn’t get the attention.

That’s all fine with me. My clients, partners, and portfolio companies are quietly taking advantage of the shift.

Experts are in deep agreement – now is the time to Assess & Trial these new technologies.

You see, blockchain does a bunch of things. It makes some things simpler and more powerful, which is cool. BUT – it also makes things that were formerly impossible possible.

Why don’t I own and control my own personal digital identity? Because it wasn’t possible. Not on a technical basis – we could have shared a massive global federated identity. But corporate, business, political, legal, and other reasons have blocked these.

Blockchain changes that – the barriers that have been in place fall down with blockchain in the picture. 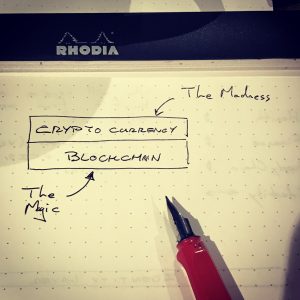 And digital identity is just one of the stories – but it is a perfect example because before blockchain a global public digital identity wasn’t possible. Sure you could grab a Facebook or Google identity but it isn’t yours and they certainly don’t allow you to use them interchangeably.

Digital Identity has long been a “silo-ed” thing – it gets dropped into a silo of data for a particular use – your work, your bank, your e-commerce sites, all have different versions of you. It can’t usually be used outside of the silo. And by the way – you don’t own any of these digital identities.

What blockchain and other distributed ledger technologies made two key things possible:

Those two simple shifts have ushered in a massive technology shift.

The shift is just beginning. The leaders in almost every industry are already assessing and trialing blockchain, particularly self sovereign. They know that the technology is nascent and that their organizations need to figure out how it fits into their plans. They are already moving and some pretty incredible results are coming out.