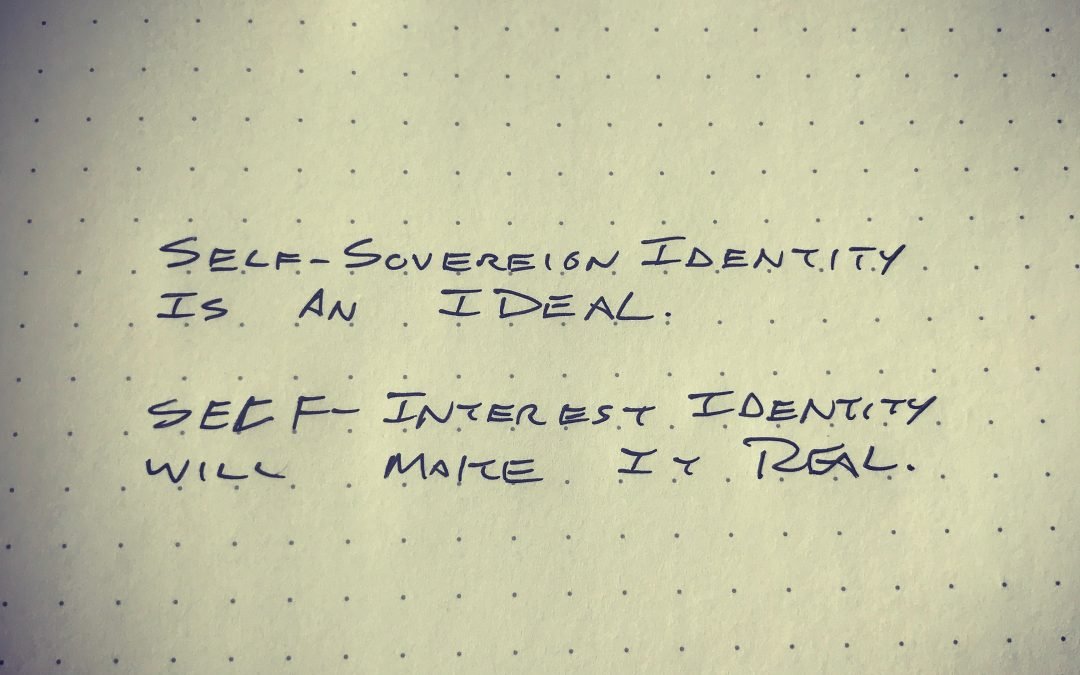 I am sceptical that the “benefits” that most of us are using about self-sovereign identity (SSI) are going to change the world. I really don’t believe that they make much of a difference to people and organizations. I believe that self-serving identity is what we need at the moment. This is a somewhat tongue-in-cheek article that should help business leaders start to figure out SSI.

PREMISE: SSI promises massive increases in personal control, privacy, and security – these increases are not enough to make a change in the market.

You see, control over one’s digital identity; privacy; and security just don’t matter to most people.

At least not directly…

For those of you that just freaked out, let me reassure you – I am still “all in” with my conviction that self-sovereign identity is incredible and that it will rewrite much of the internet and business over the next decade.

I just don’t believe that the current dialogue about the benefits of SSI will be the real change factor.

What is Self-Serving Identity?

A couple of years ago researchers proved that when asked, people will tell you that privacy is very important to them – critical even. Then, minutes later, when tested they give away their privacy for a piece of pizza1.

Why would somebody do this? Why would they say one thing (privacy is important to me) and then do the opposite (give away privacy effectively for free) minutes later?

Simple – we act in our own self-interest.

Somewhat facetiously, I think SSI, to be initially successful could be called self-serving identity.

People and organizations (profit driven, not-for-profit, governments, etc.) don’t act on the grand vision of what is right and what should be done. They act in their own self interest. They do what feels right for them. I certainly believe that underneath the surface most people and organizations are good and moral, but that won’t sell the shift in power and digital relationships that SSI promises.

Privacy and security just don’t appeal to our self-interest, at least not directly. They aren’t self-serving. Privacy and security are rarely front of mind for people and organizations. At the moment, current events (Facebook and the surveillance economy, GDPR) are forcing the issue at the moment, and that is great. This attention will wain and the focus will return to our relationships and how easy, effective, and even pleasurable our interactions are.

Behind these first-order are the second- and third-order problems and benefits that are crucially important – but nobody (ok – almost nobody) cares. If you can’t help a person with an easy tool that meets their needs or provides a direct-benefit – you won’t get to the crucial benefits of self-sovereign identity.

All too often the deep techies and visionaries of the world see the promised land from afar – we know the benefits and what can happen. The problem, and I am as guilty of this as any, is that the vision doesn’t pay the bills, explain what benefits can be had now, or drive the change needed to get to this promised land.

Concrete steps need to be taken – and they are different from the theoretical.

Timothy Ruff, CEO of Evernym (disclosure: I am an investor in Evernym) just released an incredible article that helped some of my thinking consolidate. Timothy discusses the concept of “single-source SSI”2  – which has immediate first-order benefits for people and companies:

That’s the message that will push SSI forward. SSI moves forward when people and organizations see the massive direct benefits. Business leaders will look to SSI because of these benefits – and accrue the privacy, security, and control benefits as they do wo.

All of those benefits above are part of self-serving identity – they aren’t about privacy or security or personal control, though all are baked in to SSI – by default and by design.

Meanwhile, in the background, we can’t stray from the long-term vision. The deep thinkers and policy makers need to be fighting the battle for us – on correlation risk, on privacy and security, on making sure that we are well served and well protected, and that we are in control where we should be. Lawmakers need to drive the incentives for increased privacy and security – pushing for the protections that we need and don’t think about because they are not first-order problems. GDPR is a great example of these incentives.

10 Years From Now, It Is No Longer Called Self-Serving Identity

In 10 years nobody will care that the advent of self-sovereign identity created a seismic shift in both technology and the balance of power. What they will care about is that their lives have been improved. They won’t talk about privacy, security, and other things that we talk about.

And somebody, in 10 years, is going to say “Really? You let a big company control your identity and monitor everything you did? Why would you do that?”.

The answer is simple – at the time it was self-serving. We guided the danger of that away by using self-serving identity – and shifted the balance of power and control. SSI became real because we focused on the first-order benefits while ensuring that the privacy, security, and control that is really needed

For those of us making changes behind the scenes, we will be proud that we helped shift things –  but it will be a quiet shift. An initial focus on self-serving identity is a tool that will help us get where we need to go.

NOTE: I’ll be updating this article from time-to-time as the message evolves and I get feedback.